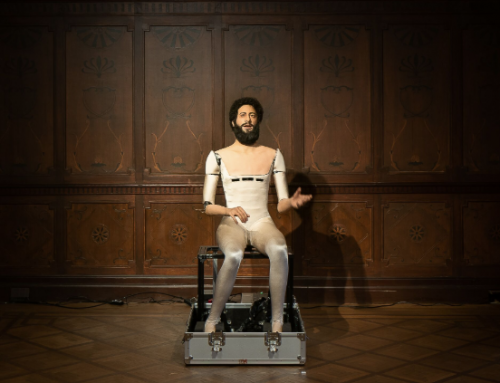 Prada presents What Was I?, a new exhibition project conceived by Goshka Macuga, with the support of Fondazione Prada. On view from 23 March to 2 June 2019, it will take place in the premises of Prada Rong Zhai, a 1918 historical residence in Shanghai restored by Prada and reopened in October 2017. What Was I? is a kaleidoscopic journey in the post-Anthropocene epoch, after the collapse of humankind due to the effects of technological overdevelopment. The protagonist of this unexpected voyage is an android created by Macuga and produced in Japan by A Lab for the exhibition presented in 2016 at the Milan venue of Fondazione Prada. The android recites/rehearses his monologue constructed from numerous excerpts of seminal speeches, claiming himself to be a repository of human knowledge. In this futuristic scenario, where the human perspective is no longer valid, the android is the only inhabitant of Prada Rong Zhai and a discrete presence in the residence. The key and dramatic question: "What was I?", that closes his enunciation and gives the title to a Macuga’s neon piece and to her new project, was originally pronounced by Frankenstein’s monster in the gothic novel written by Mary Shelley in 1818. In Macuga’s fictional and post-apocalyptic universe, the android occupies the rooms of the historical house, revealing his personal art collection and belongings: 26 works from the Prada Collection, including several Italian art masterpieces, from 1958 to 1993, as well as 3 recent paper collages by the artist, part of the series Discrete Model. 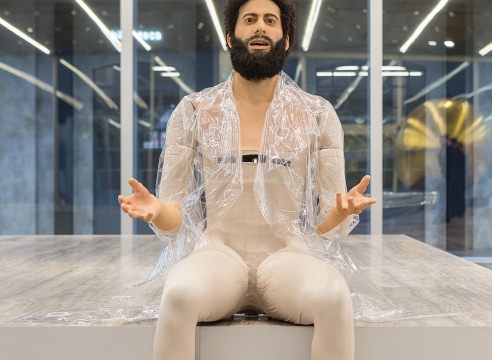